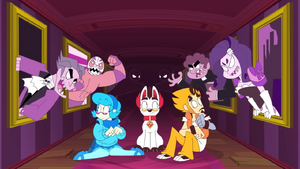 The Painting Ghosts[1] exist in a hallway in the mansion. There are six visible ones, four of which can be recognized as individual characters: a man in a magenta suit, a woman in a corset, a preacher, and a lucha libre.

Community content is available under CC-BY-SA unless otherwise noted.
Advertisement