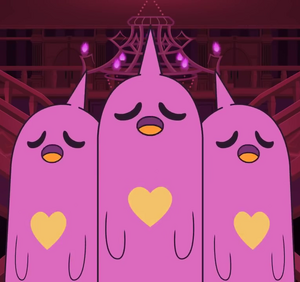 "Dead Beats" are residents of The Mansion and are primarily backing characters and back-up singers in the Animated Ghost Music Video. They also appear in Freaking Out when Lewis reforms and goes to look for Vivi and Arthur. In Hellbent, one sits in the truck with Lewis. When Lewis threw Arthur inside the truck, three of them block the right path to the cavern, forcing Arthur to take the left. It seems that there are six in total (seen in Ghost behind the current Mystery Skulls Animated Crew), but most of the time only three are seen.

Community content is available under CC-BY-SA unless otherwise noted.